I Felt the Fear!

I'm posting on the subject of fear!  We all feel it, it's part of life it's natural to fear, it's a protection, without it we would run into all kinds of difficulties e.g. not fearing the results of dangerous driving etc!
The fear I'm talking about is one of the worst kinds of fear.  Last night I felt this fear like I've not felt in years, and don't want to feel again!  My little feller Jasper was in the back garden as normal whilst I was busy assembling a photo montage for my friend.  I was all consumed by my activity and was vaguely aware of Jasper barking, which is quite normal as we live on a country lane with regular farm traffic clanking by.  Dougal and Jasper love nothing better than to guard our property from the monster machinery descending down the hill!
My love, all alarmed asked me where the little feller was?  "Is he upstairs?".  "Don't think so I replied", as I looked frantically, this was very unusual for Jasper as he's a very obedient dog, comes immediately when called!  We searched the length and width of our two acre plot, no sign!  The silence was very odd, the night was quiet not a leaf rustling, it felt very eerie!  Fear and panic set in!  My mind rushed with all kinds of wild thoughts - had he got out somehow and been run over laying somewhere hurt or dead and we can't see him in the pitch black?  Has someone noticed him in the garden and taken him  for drug money or something?  It would be no hard task to whisk him from over the wall?  What if they're treating him cruelly?  Only this week's news reported  a wicked woman stroking a cat then disposing of it in a nearby wheely bin and calmly walking away!  Caught on video camera!
I was beside myself with fear, an hour passed by as I sat in  the garden crying and calling to him, wondering his fate, the thought came to mind how terrible it would be to lose a child if this is what it feels like to lose my dog!!
I went indoors and decided to phone my son to ask about chipping?  Because he's been chipped could he be easily sold? Should we phone the police?  Just as my son answered  the phone and I blurted out the words "someone's stolen Jasper", there he was!  He mysteriously appeared at the door!!!!
I can't begin to describe the wonderful relief!!!!  My beautiful, soft, silky Jasper was there, everything was well, back to normal, we could all relax, no need to fear any longer!   It was all like some bad dream, but snuggling and cuddling up with Dougal and Jasper on the couch I soon came round and felt very, very lucky!!! 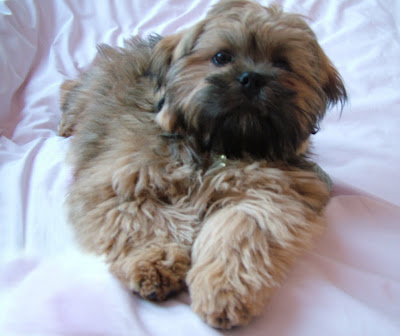 The question and mystery still remains, where did Jasper go for one whole hour? 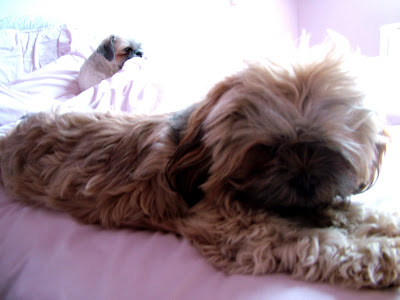 Did someone take and return him because he's got one sticky-out-foot?
I keep asking him but he's not telling!
Perhaps he's told Dougal?
?????

The DJs
Labels: The DJs

Rochelle said…
Oh that is a horrible, horrible feeling (it's happened to me the few times my indoor cat got outdoors - ugh!). So relieved that there was a happy ending.
30 August 2010 at 03:27