September 25, 2010
I mentioned earlier that I would be adding a new element to my blog entitled 'Lessons Learnt'  To that end I thought it would be a good idea if I could think of something that would visually express this idea?  My daughter came up with the visual - 'wise old owl' and between us we set about creating one.


At this point I must say thank you to Monica of Bohemian Shadows for reminding me of an old technique called sgraffito which I used here:

For a step by step guide on how to achieve this look visit  Bohemian Shadows. 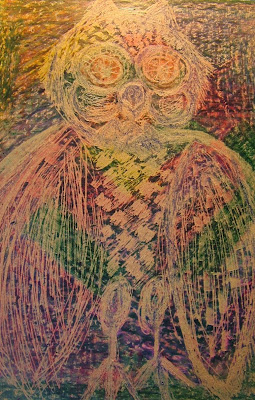 A Photographic -
No Digital Manipulation Texture:
Here's something that fascinates me in photography, the play of light, the different effects light can produce with just a tilt of the object to be captured. To illustrate the difference I shot the same image in two different lights, the one here was taken indoors with the normal domestic light.

The second image that excites me the most, was taken on the window ledge in natural light, the artwork tilted just the right amount so that the light hits at an angle and causes the image to look textured. 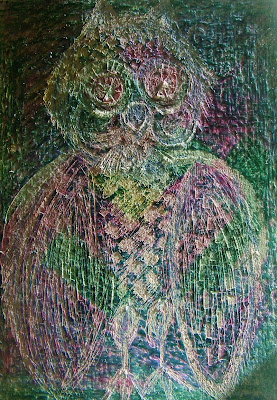 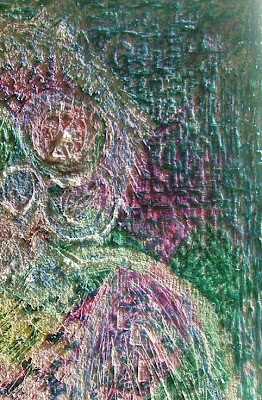 Keep a Look Out for this Wise Old Owl!

rebecca said…
i think the nicest signage posted in our practical world are the small boxes with the button to push for the cross walks of busy intersections...they read,

Suzie Ridler said…
I have a strong connection to owls so this post is truly beautiful to me! Great photography and lighting is so important. Thank you for your kind words on my blog, I am so glad you are enjoying for PEI posts. Today it is the chocolate festival, totally up my foodie alley although the lighting conditions for the dinner were miserable!

Wow, a catering lodge in a lighthouse? Now that's the coolest! Black sand sounds fascinating but what an impact it would have on the water around it. Yes, I will hold on to my trip like a talisman to get me through the winter.
26 September 2010 at 14:06