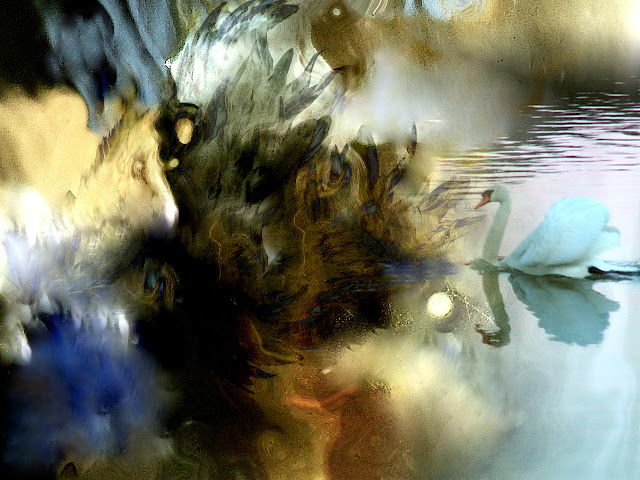 It feels a bit like a dream now, surreal even, the water seems so lonely now she's gone.
Although she was ours for only six days altogether we began to think of her as family.
Salina we called her, it was the name of my grandmother who I'd never known,
I thought it had a graceful air about it and seemed fitting.

Five mornings in a row I made my way to the water's edge crust in hand,
Salina on first sight of me glided across for breakfast as though we'd always done this.
I was ecstatic, our very own swan sailing serenely on the water, an idyllic country cottage scene.

The lad from across the way raised some concern in our minds pointing out that our pond may not be large enough for her to take flight should she need to.  At this point I began to realise I was starting to worry for her welfare just like you do for family!  Was there enough natural food in the pond and round about for her nourishment, was she stranded on the pond, lonely?

Yesterday morning my love announced that Salina was making her way up the hill of the field behind the house, he thought she may have been attracted to the newly sprouted crop shoots, but after pausing he went on to report she was making her way to the top of the hill and she was now poised ready for take-off.  He went on to recount her running down the hill wings spread wide and flapping, touching the ground once and again and then she was off, she gained height above the pond soon disappearing from view.

I was feeling sad and relieved all at the same time, sad at the thought of losing this beautiful creature and also relieved that I didn't have to worry for her.  In actual fact I never did have to worry for her, she could look after herself perfectly and what's more she never really was ours, she was always wild and free, just visiting!

Mystic Meandering said…
Oh how I love this post! Gave me goosebumps... Such a special encounter and connection for you! Yes, just visiting - sigh. Am glad she is okay, and didn't die... That would have been way sad... And I absolutely *love* your photo! Those eyes watching from the shoreline as she glided along. Your post was a wonderful inspiration for me today! Thank you! Heart Hugs...
8 May 2013 at 00:55

Unknown said…
what a wonderful gift. and so extra special, in such a private setting. i hope you chatted and received what you needed from her.
8 May 2013 at 08:26

Miss Robyn said…
sometimes, spirits come into our lives for a reason, a season or a lifetime... Swan Medicine.. so much wisdom.. but this is for you
: 'The Swan's call teaches the mysteries of song and poetry,
for these touch the child and the beauty within.' xo
8 May 2013 at 08:30

Stephanie said…
Sue,
This was like reading a beautiful fairy tale...how very special to have had her spend some time with you. Your photograph just adds to the beauty and magic of the tale.

Lynn said…
I understand, it is so easy to become attached to these wild and lovely creatures, not just Swans...and you were so lucky to have had Salina near for 6 days..lovely photo
10 May 2013 at 19:38

Cat said…
oh Sue
how beautiful...
i just have to share with you the medicine...the gift that she brought to you:
The Swan is one of the most powerful
and ancient of totems.

As you begin to realize your own true beauty,
you unfold the ability to bridge new realms and new powers.
Swan can show you how to access the inner beauty
within yourself and in others.

A Swan totem heralds a time of altered states of awareness
and the development of intuitive abilities.
Swan people have the ability to see the future,
and to accept the healing and transformation
that is beginning in their lives.
Accept your ability and go with the flow.
Stop denying you know who is calling when the phone rings.
Pay attention to your hunches and inner knowledge,
and Swan medicine will work through you.

The Swan's call teaches the mysteries of song and poetry,
for these touch the child and the beauty within.